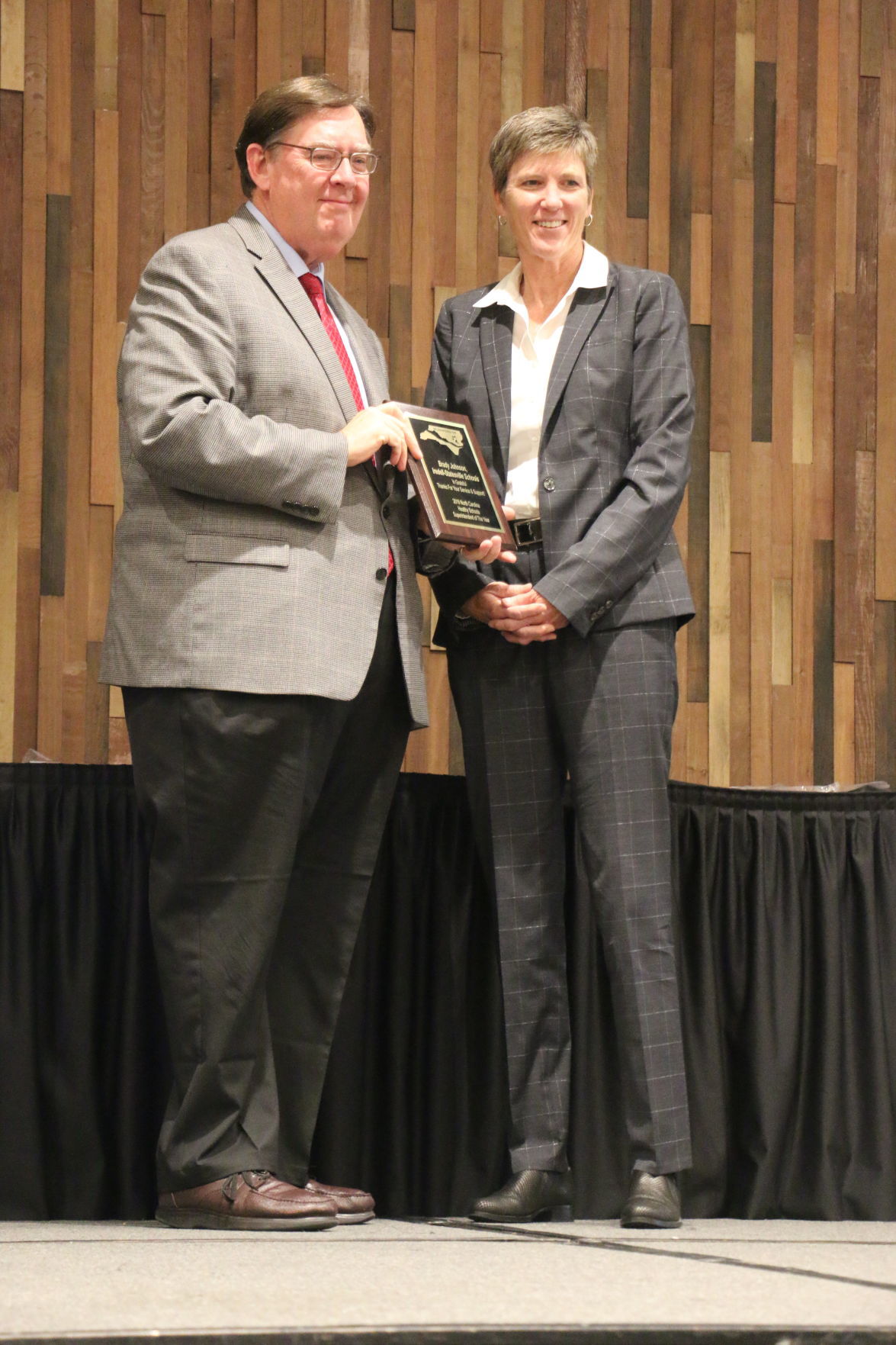 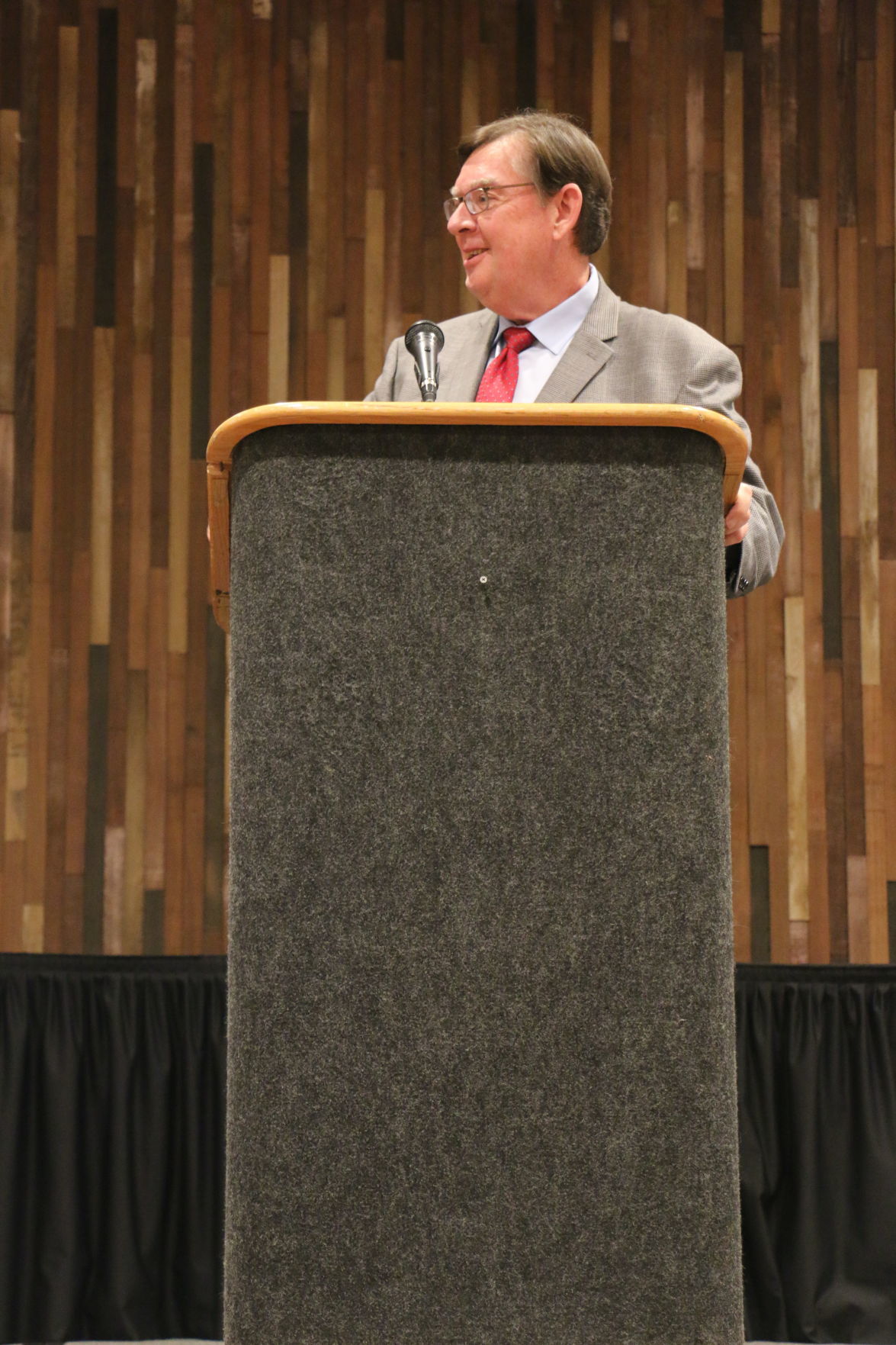 WINSTON-SALEM — At a reception in Winston-Salem, Iredell-Statesville Superintendent Brady Johnson was named the 2019 North Carolina Healthy Schools Superintendent of the Year.

Presented by Ellen Essick on behalf of state Superintendent Mark Johnson and the N.C. Department of Public Instruction, Johnson earned this most recent accolade as a result of his leadership in improving the health and well-being of students and staff of the Iredell-Statesville Schools. His vision and support of the Whole School, Whole Community, Whole Child Model has been a priority for the superintendent.

Section Chief for NC Healthy Schools Ellen Essick said, “We applaud Mr. Johnson’s efforts to ensure that health and academics are considered equally important components to student success.” Johnson has served the schools of Iredell County for more than 40 years, having served as superintendent since 2009.

Upon being presented with the award, Johnson said, “If a child is cold, hungry, fearful or conflicted with social or emotional issues, they can not learn. For this reason we must focus on the whole child — mind, body, and spirit — in order to effectively educate our children.”

He also made mention of the importance of community partnerships to the success of students. “I-SS is blessed to have more than 150 community based partners that help us address the needs of our students. This involves many of our churches which provide school supplies, food, clothing, mentors, and they lift us up in prayer. There is no better reflection of the communities soul than the way it addresses the needs of children. Here in Iredell County, we are grateful for a community that shows its love for children.”

During Johnson’s tenure, I-SS has successfully received more than $50 million in federal grant funding for its leadership and innovation in education reform, efforts to close academic achievement gaps, and implementation of a one-to-one technology initiative that revolutionized the way curriculum was delivered to middle and high school students. I-SS was recently awarded a $12.8 million federal grant that will allow 21 schools to have access to mental health resources that were otherwise not available.

In addition to expanded therapy programs and crisis response services through the Children’s Hope Alliance, the grant funds will help secure additional positions, including behavior specialists and behavior technicians.

Johnson also led an initiative to train all 2,700 Iredell-Statesville Schools employees in suicide prevention and mental health awareness. Through a partnership with the American Foundation for Suicide Prevention, the I-SS is one of the first school districts in North Carolina to elevate the importance of mental health awareness.

Johnson has served multiple community and faith-based nonprofits, including but not limited to The Boys and Girls Club of the Piedmont, Child Evangelism Fellowship and the Iredell Bible Association. In 2016, the Greater Statesville Chamber of Commerce named Johnson the Citizen of the Year. In 2018, Johnson received the Distinguished Alumnus Award from the Mitchell Community College Alumni Association. In 2019, the Piedmont Council of the Boy Scouts of America named Johnson the Citizen of the Year.

Stumps, Trees and Forestry by DAN