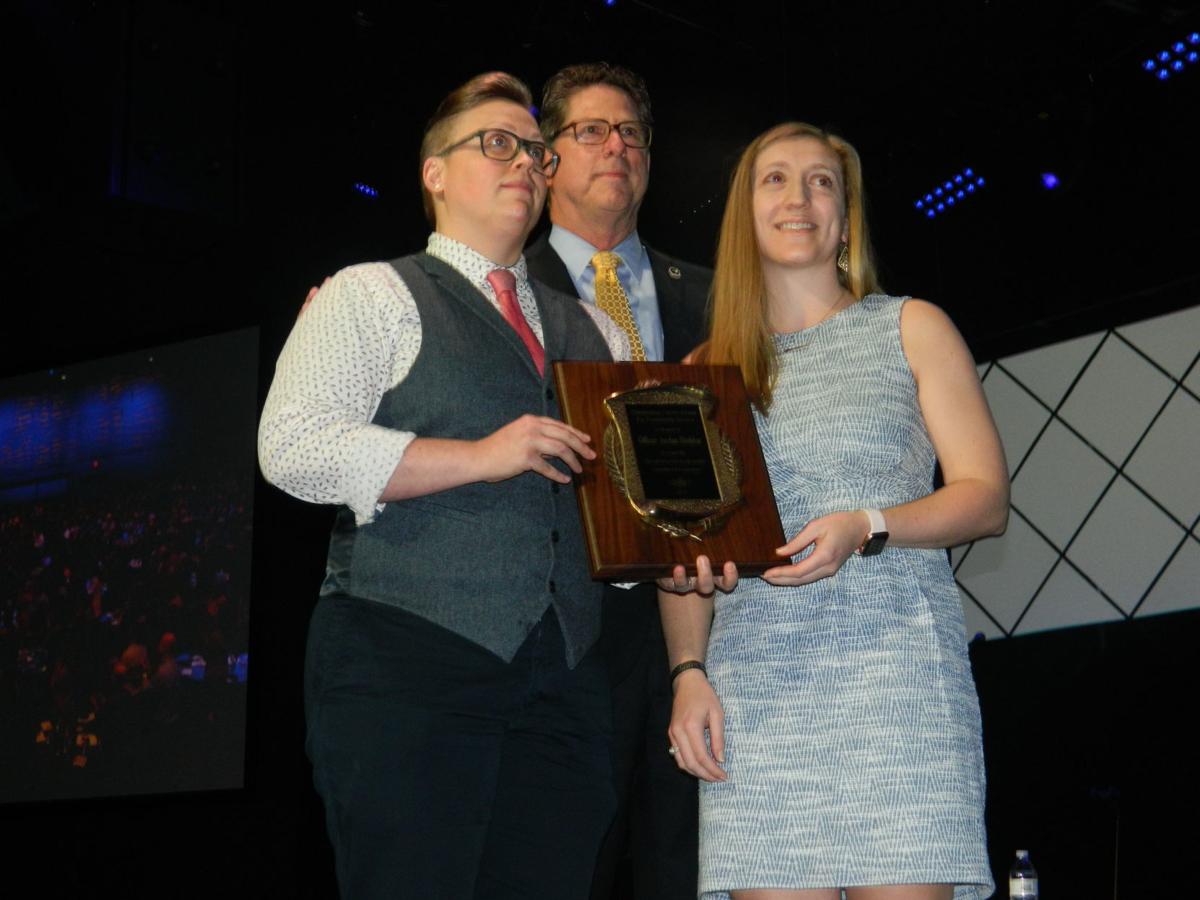 Lauren Sheldon (left) and Jamie Basham (right) are shown with Mayor Miles Atkins who presented the Citizen of the Year plaque in honor of Officer Jordan Sheldon. 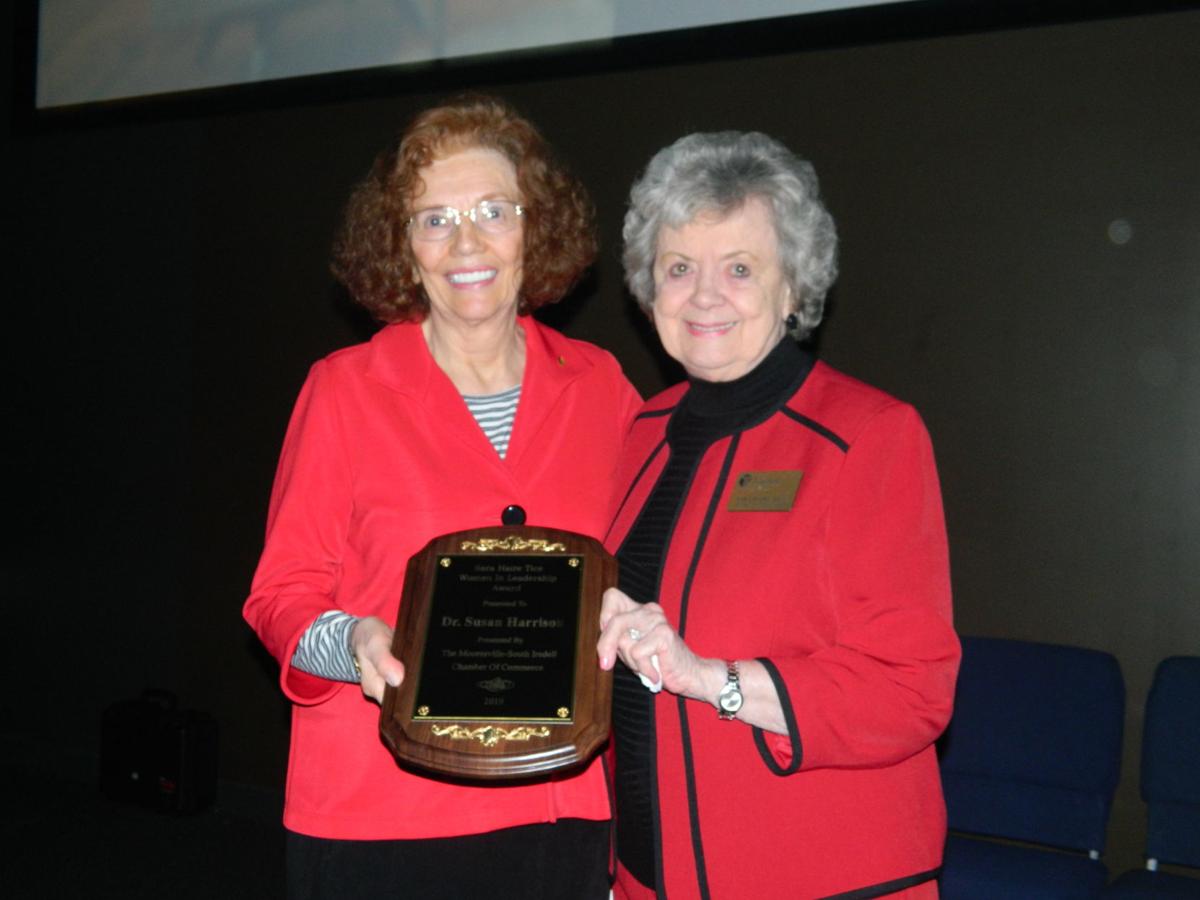 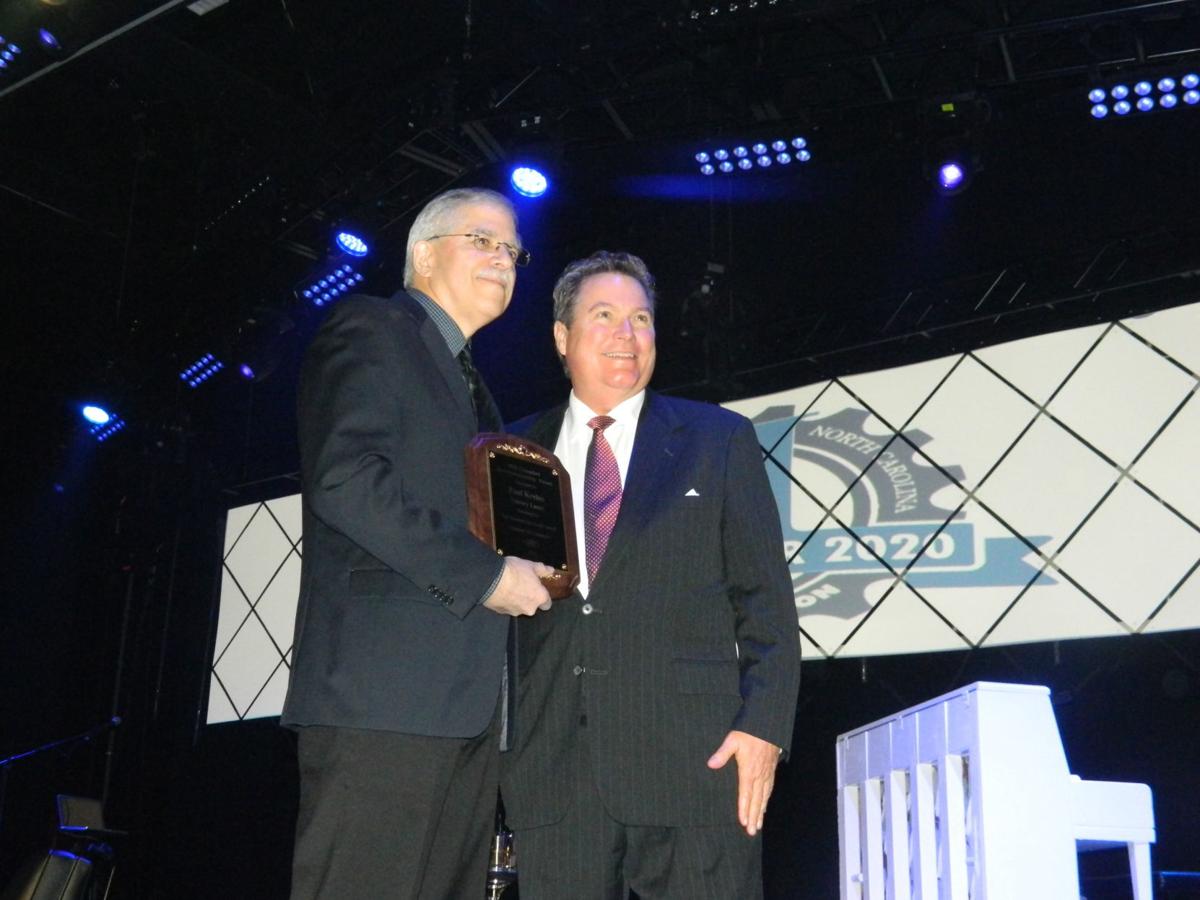 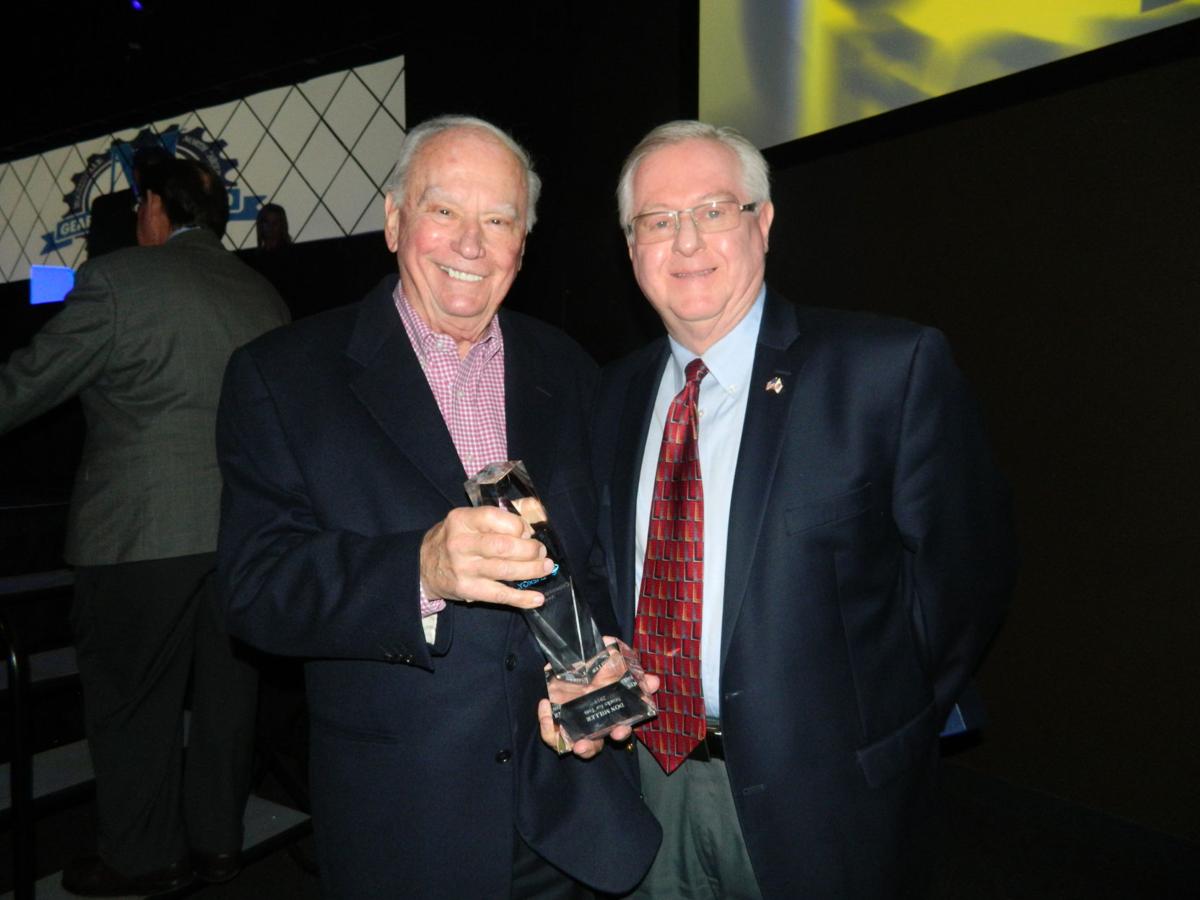 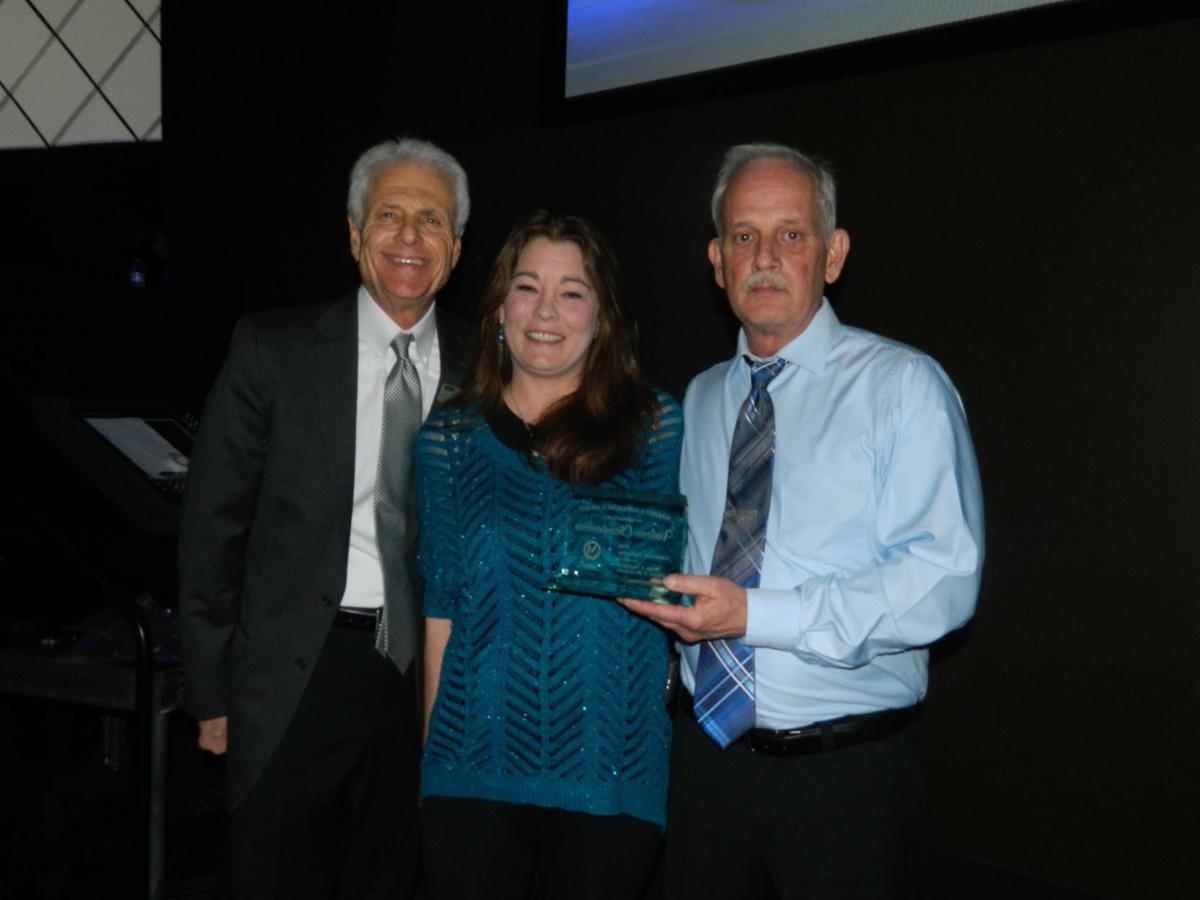 Jeff Shoe (left) presented a special award in honor of Valerie Chamberlain. Accepting the award were her husband, Craig and daughter, Kat. 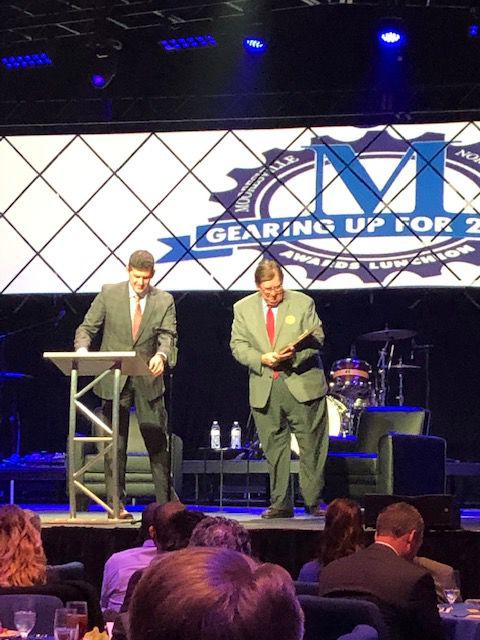 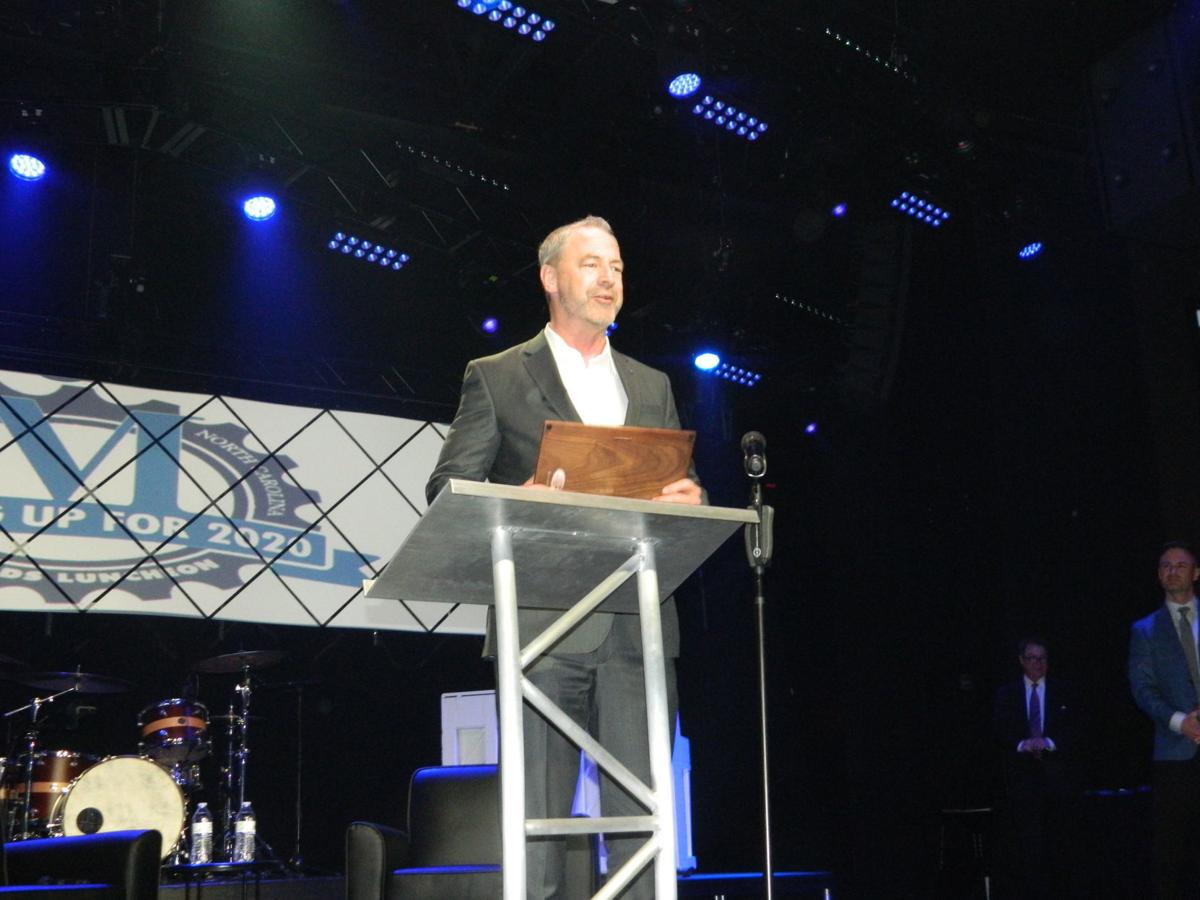 Brian McCarthy of Greenworks accepts the Mooresville Ford Business of the Year Award.

Lauren Sheldon (left) and Jamie Basham (right) are shown with Mayor Miles Atkins who presented the Citizen of the Year plaque in honor of Officer Jordan Sheldon.

Jeff Shoe (left) presented a special award in honor of Valerie Chamberlain. Accepting the award were her husband, Craig and daughter, Kat.

Brian McCarthy of Greenworks accepts the Mooresville Ford Business of the Year Award.

The Cove Church was packed Tuesday with business leaders, government and school officials and chamber members for this year’s Mooresville-South Iredell Chamber of Commerce awards ceremony and luncheon, which was centered on the theme of “Gearing Up For 2020.”

Nominated by the members of the chamber, recipients of the various awards were presented during the special event along with a conversation-style keynote address by NASCAR driver and business founder Brad Keselowski.

In a conversation-style interview between Keselowski and John Dodson, Keselowski talked about his family, racing, business and foundation.

The annual event, as Chamber President Kirk Ballard shared, was a “celebration to recognize businesses and individuals who have made a positive impact on our community throughout the year.”

Citizen of the Year

As the video came on detailing the Citizen of the Year Award, those very words were echoed about the impact left on the community by this year’s recipient, Mooresville Police Officer Jordan Sheldon, who was killed in the line of duty last May.

Sheldon’s brother Carson Ledford, in the video, told about how the family was “blown away by the support of those who didn’t even know him (Jordan) and how the people of Mooresville lined the streets to bring our boy home. Jordan left an impact.”

On hand to accept the award honoring Sheldon for his service and sacrifice for the entire community was his sister Lauren Sheldon of Gastonia and his fiancée Jamie Basham of Mooresville. The crowd rose to their feet and applauded to show their thanks and continued support as Mayor Miles Atkins presented the plaque.

“We tried to remember people who have made Mooresville what it is,” Ballard noted, which was done not only with the award to Sheldon but also with the special presentation in memory of Valerie Hope Chamberlain, who served as the executive director of the Mooresville Christian Mission for 14 years.

In making the presentation, Jeff Shoe drew attention to Chamberlain’s middle name, Hope, as he said that is “what she offered to thousands. She didn’t sit on the sidelines.” As he presented the plaque to Valerie’s husband Craig and daughter Kat, Shoe gave thanks for her dedication to the community. Craig and Valerie have two other children, Matt and Rachelle, who were unable to attend.

Craig Chamberlain took the podium for a moment and with great emotion thanked the chamber for the award and shared how his wife did “make a difference in this community” after which he challenged each one to continue in their giving to help local charities.

Also presented was the Sara Haire Tice Women in Leadership Award, which went to Dr. Susan Harrison. She noted that she had not done anything, but was “privileged to receive this award.”

In her presentation, Tice noted Harrison’s numerous accomplishments and community service, some of which includes she and husband David, along with another couple, began a church in Budapest, her serving as the pastor of a local church, where she also taught adult Bible classes and was a Stephen minister.

In the community, Harrison has volunteered as a cook team leader at the Mooresville Soup Kitchen and served on its advisory board, is a volunteer with Hospice and the Community Pregnancy Center of Lake Norman, is a Guardian ad litem and has led programs at several nursing homes.

Business of the Year

The Mooresville Ford Business of the Year Award went to Greenworks. Brian McCarthy, the new president of the North American unit, accepted the award from Grant Shoe. McCarthy said that he had only been here for one month and “so I don’t deserve this award, but those who have done the work so I could be up here” deserve the honor. He thanked everyone on their behalf.

The New North American headquarters are located in the historic Mooresville Cotton Mills complex in downtown Mooresville. McCarthy also noted that Greenworks is a “proud sponsor of Earth Day.”

Kreins said that he came to Mooresville in 2012 and “I saw the potential of Victory Lanes and I thought it was incredible.”

Kreins noted their proudest achievement at the center is the “Say No to Drugs, Say Yes to Bowling Summer Program,” which provides safe summer fun for youth. They have also hosted a dozen bowling tournaments and are looking ahead to 2027 when they will serve as the host of the U.S. Bowling Congress.

He said that he made a “conscious effort to be out in the community. I felt at home,” Kreins said. “The community embraced me. I have never felt more at home than in Mooresville.” Noting that the success of Victory Lanes is a team effort, and it never would have happened without others, he expressed his thanks. “I am proud to have received this award,” he said.

The Duke Energy Service Award went to Stocks For Tots. Don Miller, chairman of the Stocks for Tots Foundation and one of its founders, accepted the award.

Miller said that this “all volunteer, non-profit organization has raised over $1 million for abused children along with hundreds of thousands of dollars in toys.”

According to the Stocks For Tots Facebook page, it was “established in 1989 and is committed to raising funds and awareness for child abuse prevention and parenting.”

“(There is a) soft spot in my heart for this community,” Miller said. It was a race community when I came, now it’s my home. You guys are amazing. I don’t see you turning your back on a worthy cause.”

The Chairman’s Award was presented by Dr. Tim Brewer, president of Mitchell Community College and the new chairman of the chamber. This award went to Brady Johnson, who was recognized for his distinguished service these 10 years as the superintendent of the Iredell-Statesville Schools system.

Brewer noted that Johnson is a native of Iredell County and a graduate of Mitchell Community College. He has helped in the community by serving with United Way, the Boys and Girls Clubs and Crosby Scholars, just to name a few.

The event concluded with Ballard asking each person to take the flashlight provided at their place settings and to turn them on. As the lights were dimmed, he challenged each one to be that light and make a difference.