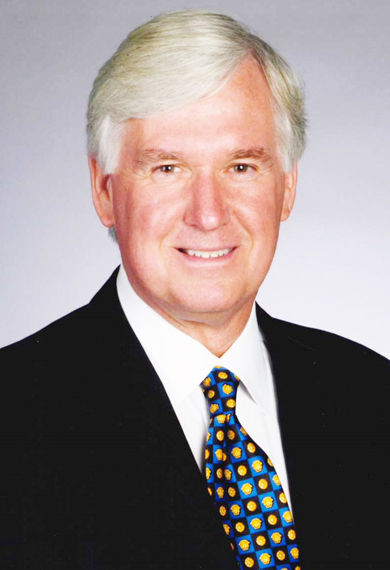 April 7, 1946 - May 12, 2020 Dale Pond, of Mooresville, died Tuesday, May 12, 2020, after a valiant fight with Primary Progressive Aphasia and Dementia. Dale was born in Spokane, Wash., April 7, 1946, living in Seattle and San Diego before moving to Prairie Village, Kan. He received his Bachelor of Business Administration from Washburn University and is also a graduate of Stanford University's Graduate School of Business Executive Program. He began his career as Regional Director of Sales for an NBC affiliate in Topeka and thereafter formed an advertising agency, Peabody/Pond, also in Topeka. He served in the U.S. Marine Corps Reserves. Dale excelled in the field of merchandising, marketing and strategy development. He conceptualized the McDonald's Happy Meal in use since 1977 during his tenure with Bernstein/Rein Advertising where he managed the agency's McDonald's nine regional offices. Later he joined Payless Cashways in Kansas City rising to the position of Senior Vice President, Chief Merchandising & Marketing. In 1989, he was recruited by Montgomery Ward as Chief Marketing Officer and member of the company's Executive Committee at their Chicago headquarters. He served 12 years with Lowe's Cos. Inc., retiring in 2005, as Senior Executive Vice President, Merchandising and Marketing. During his tenure with Lowe's, Dale served on the Executive Management Committee, Real Estate Committee, Strategic Planning Committee and the Board of Directors for Lowe's Educational & Charitable Foundation. He is given credit for the enormous success of HGTV through his initial support through Lowe's as their anchor sponsor. He also was responsible for Lowe's entrance into racing, something they had been reluctant to do previously. After his retirement, Dale remained an active member on the public company board as lead director of Family Dollar Stores; Bassett Furniture Industries, Inc. chairman of Organization, Compensation & Nomination; Scripps Networks; and consulted with Hendrick Motorsports and Hendrick Automotive Group. Through the years he served on the following boards, Home Safety Council, Harvard MIT Joint Center for Housing, Kansas City Arts Council, State Ballet of Missouri, Texas A&M Joint Center for Retailing Studies, Colorado Special Olympics, The National Center for Small Communities and the Home Improvement Research Institute. Exactly two years previous to the date of his death, May 12, 2018 Dale received an honorary Doctorate of Business Administration from Washburn University. After his retirement from Lowe's, he and Susan, his wife of 53 years, traveled the world. Africa was his favorite place and they returned many times there. He was passionate about train travel and they took wonderful train journeys on a number of different continents. Additional travel included numerous trips with their daughter, son-in-law and grandchildren. The Turks & Caicos Islands provided much needed relaxation through the years. His hobbies included painting, most recently with his granddaughter, drumming, model trains, art collecting, sports cars and shopping. He loved to shop as evidenced by his enormous wardrobe of colorful shirts and matching socks for which he became known. Another one of his passions were his Great Pyrenees dogs. Most recently his two rescue Great Pyrenees, Elsa and Olaf. Besides his wife, Susan, Dale leaves behind his daughter, Ashli Guglielmo, her husband, Don; three grandchildren, Christopher, Nicolas and Angelina; and one brother, Larry Pond, his wife, Linda; and two nephews, Brian and Steven Pond. In lieu of flowers, memorials may be made to Pyrenees Rescue of Western NC, 5122 Bolick Rd., Claremont, NC 28610; the Memory Counseling Center at Wake Forest Baptist Health, P.O. Box 571021, Winston-Salem, NC 27157-1021; or North Carolina Veterinary Medical Foundation, Radiation Oncology Development Fund, Campus Box 8401, 1060 William Moore Drive, Raleigh, NC 27695-8401. Cavin-Cook Funeral Home & Crematory www.cavin-cook.com