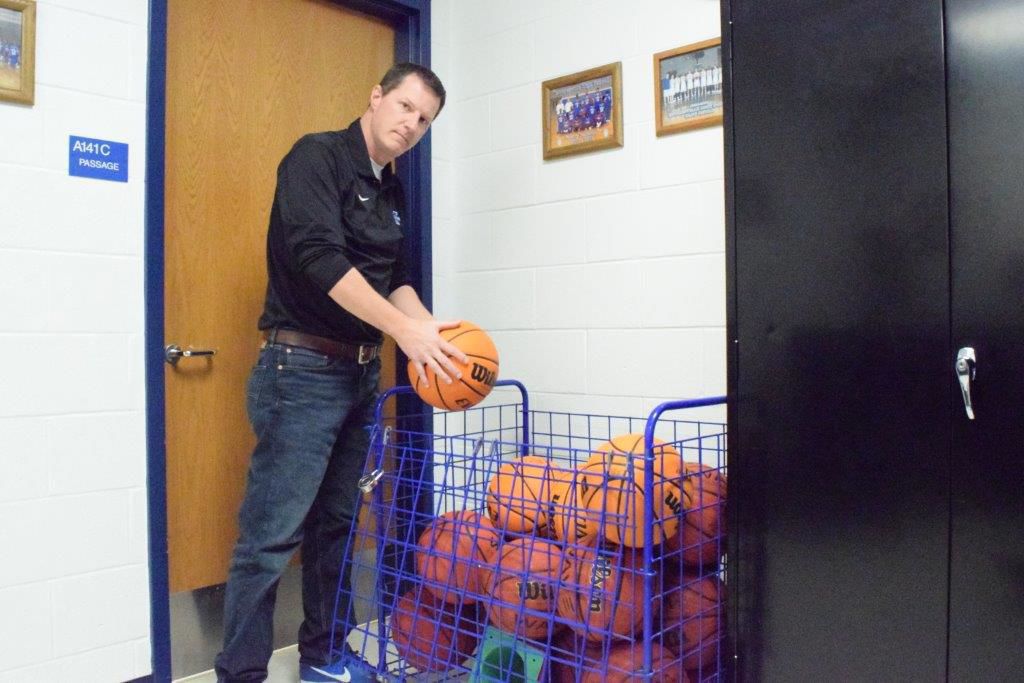 Mooresville’s Michael Micklow completes his final storing of basketballs into the storage bin upon drawing his head coaching career with the Blue Devils to a close.

Mooresville’s Michael Micklow completes his final storing of basketballs into the storage bin upon drawing his head coaching career with the Blue Devils to a close.

Following nearly 20 years of service to the program, the Blue Devils’ Michael Micklow has decided to hang up his lanyard and whistle.

After informing the school’s athletic administration, Micklow met with a gathering of players from his most recent roster earlier this week to inform them of his intention to resign effectively immediately from the head coaching position.

“It’s time,’’ said Micklow, who has been a pivotal part of the Blue Devils for a total of 18 years. “Together with my wife, we prayed a lot about it before making it final. There comes a time when a program needs to hear a different voice and see a different face. It’s a tough decision to make, but it’s one that I’m ready to make.

“I’ve enjoyed every single second I’ve been involved with the basketball program here at Mooresville,’’ Micklow said. “It’s my home. It’s where I started my coaching career. I’ll always continue to be a part of it. I’m sure I’ll peek onto the floor during some practices and games. For now, though, it’s time for me to walk away.”

Micklow informed the MHS athletic department of his department shortly after the completion of the past season.

“No,” said Charles “Hoppy” Hopkins, acting interim athletic director at Mooresville, when asked whether he was aware of Micklow’s plans previously. “He told us about it just after the season ended. We want to thank Mick for all he has meant to not just the basketball program but our entire athletic department. He’s been great for us to have on our side. We wish him the very best.”

Several factors figured into the decision.

Family comes first. Micklow plans to spend more time on his duties as a husband and a father. One of his children has recently embarked on an athletic career and he wants to be readily available to follow her efforts.

“I don’t want to miss any of her games if possible,” said Micklow.

There is also his personal situation to consider.

An unexpected illness forced Micklow to miss valuable practice time and also be absent from his accustomed position pacing the court’s sidelines barking constant encouragement in as many as three games. While still recovering, he was able to return to his duties for the Devils’ regular-season and home finale as well as a first-round game in the I-Meck Conference tournament.

“I’m one who doesn’t like to miss practice,” said Micklow, “much less games. That was kind of a wake-up call for me and allowed me to put matters into perspective. I’m better now, and it wasn’t a serious illness, but it did take me by surprise.”

Micklow guided a young team comprised of only two seniors and consisting of equal parts — six apiece in fact — of juniors and sophomores through a trying season indeed. Mooresville, a member of talented 4A class I-Meck Conference, endured a winless league standard as part of a 4-21 showing overall.

“Give our kids credit,’’ said Micklow. “They never quit. We relied so heavily on young players in a league that is jammed full of great talent. We’ve got a lot of players eligible to return. Next year’s team should be solid. The next coach will have a strong nucleus of experience. I feel like I’m leaving it in good shape.”

Micklow started his career at Mooresville at the junior varsity level following a short coaching stop at Mooresville Middle School. After three years working with the jayvee program, he took over the varsity-level head coaching duties vacated by former Blue Devils head coach Stephen Mauney prior to the start of the 2005-06 season.

“It just doesn’t seem like it’s been 15 years,’’ said Micklow. “I’ve been able to watch a lot of players go through this program. That’s probably what I will miss the most. It’s been a pleasure to work with each and every one of them.”

This season also marked the first in Micklow’s career in which he coached an offspring of one of his former players.

“That’s when you know you’ve been doing this for quite a while,’’ he said with a smile.

Although resigning as the boys basketball coach, Micklow will still remain a member of the school’s teaching faculty in the math department. He is also still planning to serve as a girls golf coach during the fall season.

“That won’t require near the commitment that I had with basketball,’’ Micklow said. “In order to do it right and the way I want, basketball took around eight months when taking into consideration the off-season preparation, summer camps and in-season practice and games. It’s taken its toll on me. I made the decision when the season ended that the time was right to make a change.”

MHS’ Hopkins indicated that the process for filling the opening will begin immediate in hopes of naming a new boys basketball head coach before the conclusion of the current school year.{/div}