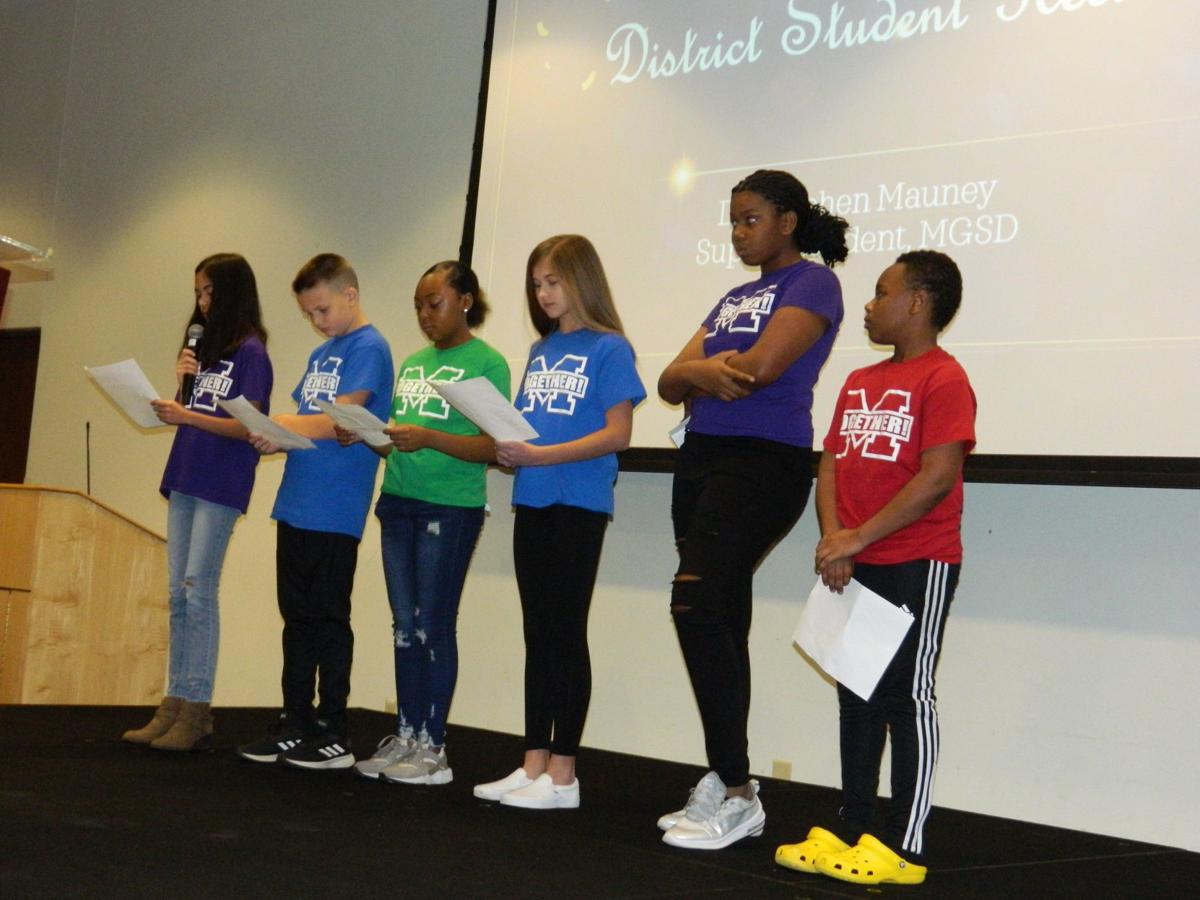 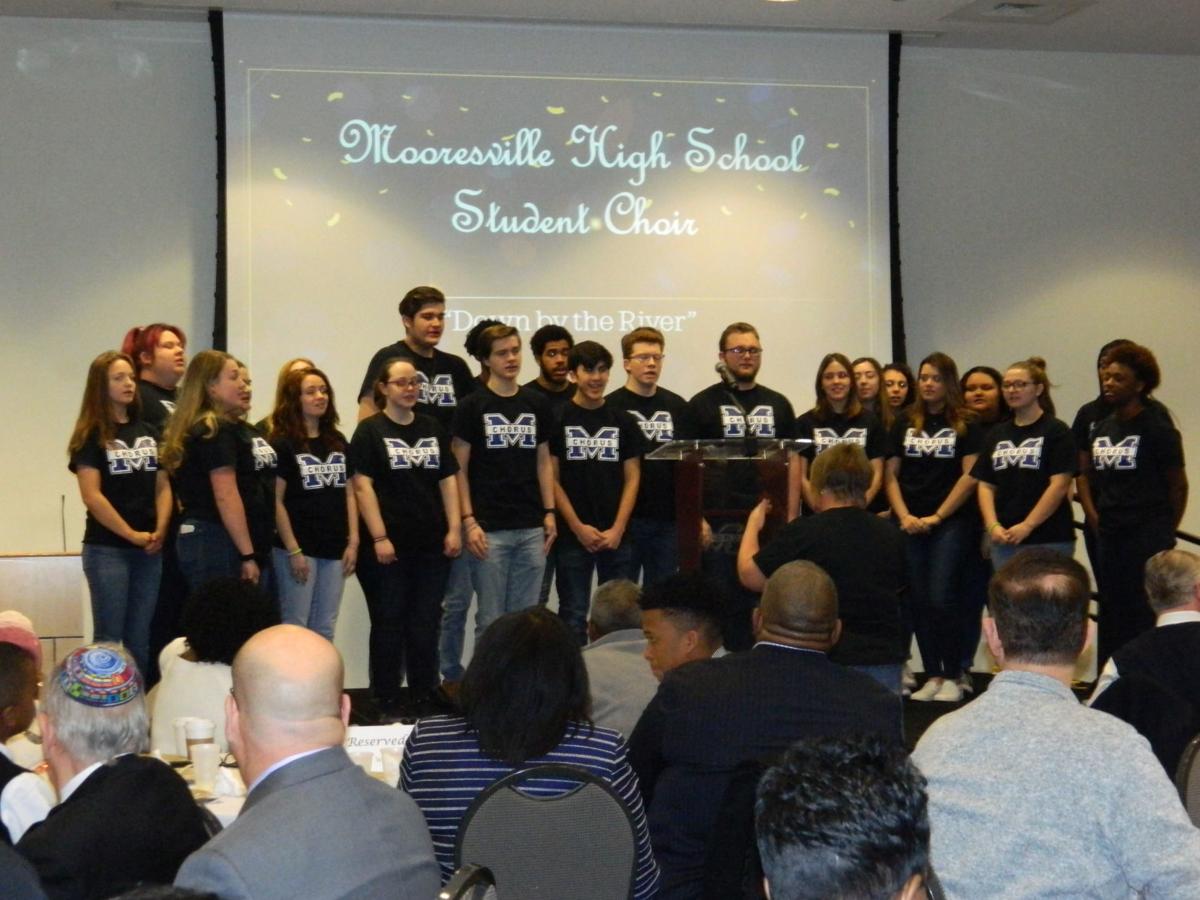 The Mooresville High School choir performed "Down by the River" at the Martin Luther King Jr. Day Community Celebration. 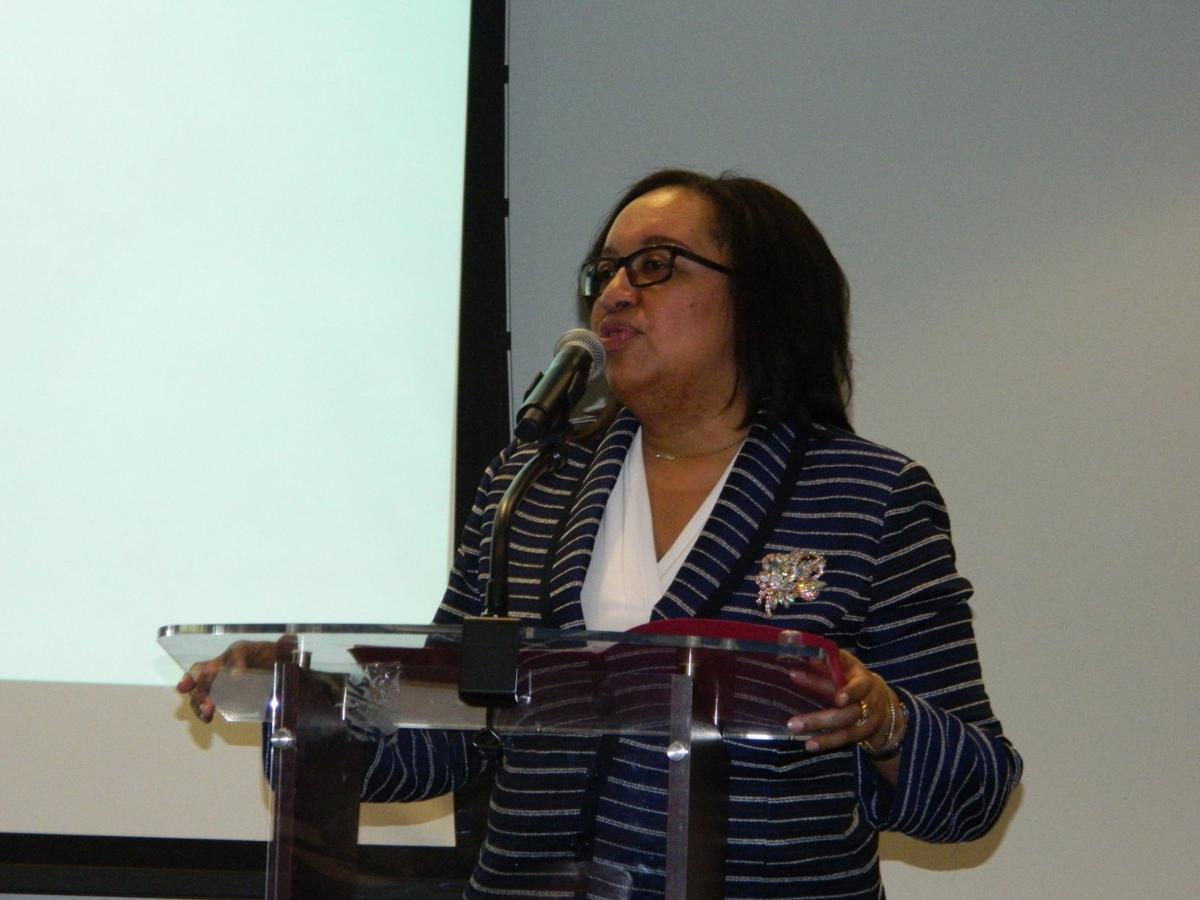 Dr. Yolanda Wilson was the keynote speaker at the event. 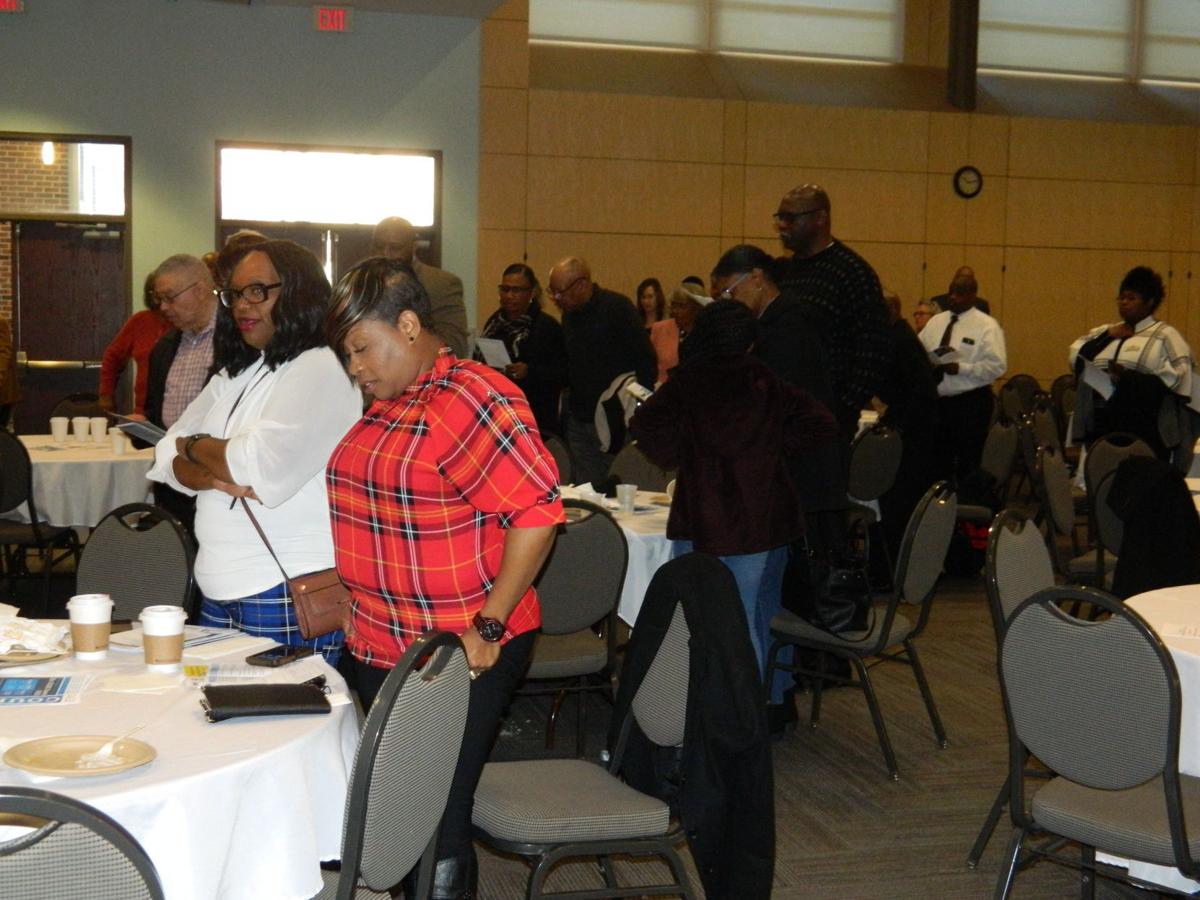 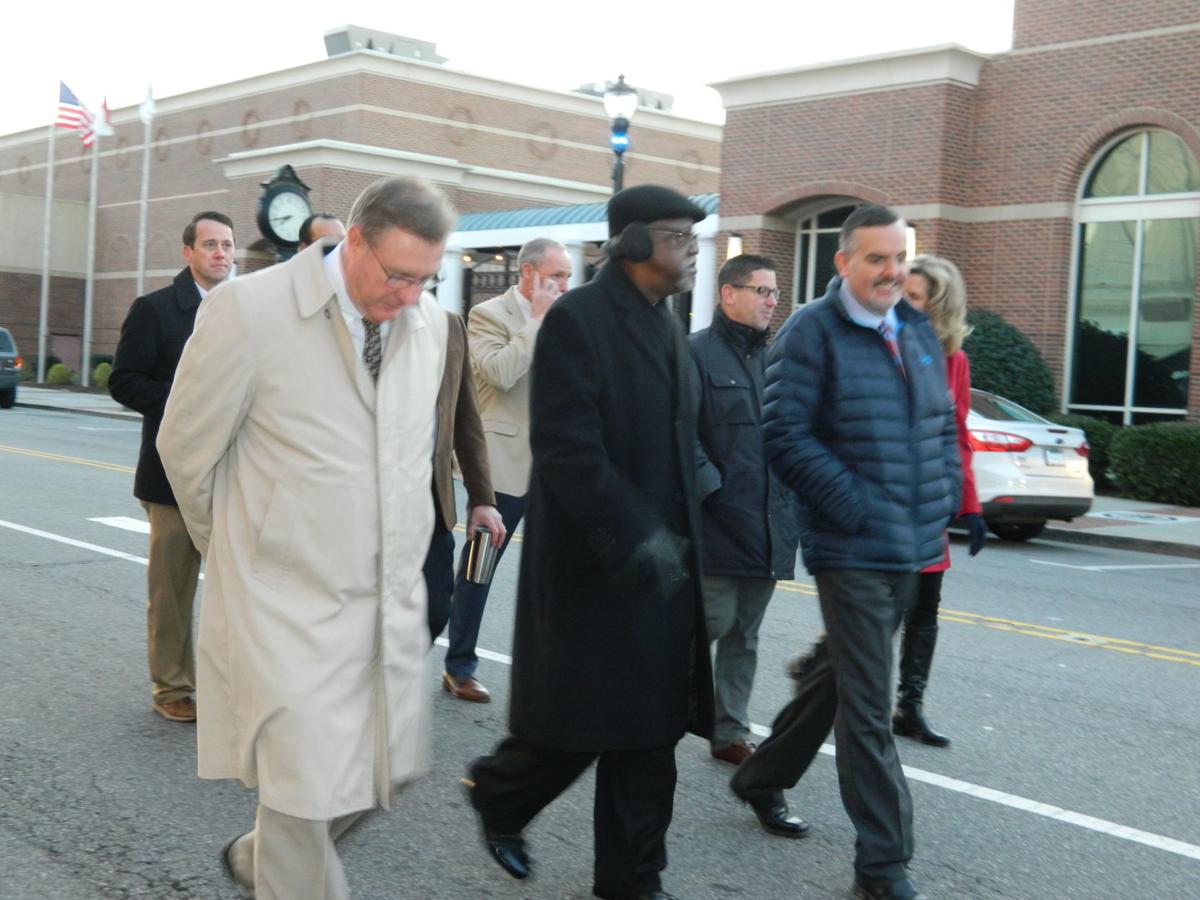 A number of people braved the cold temperatures for the Unity Walk. 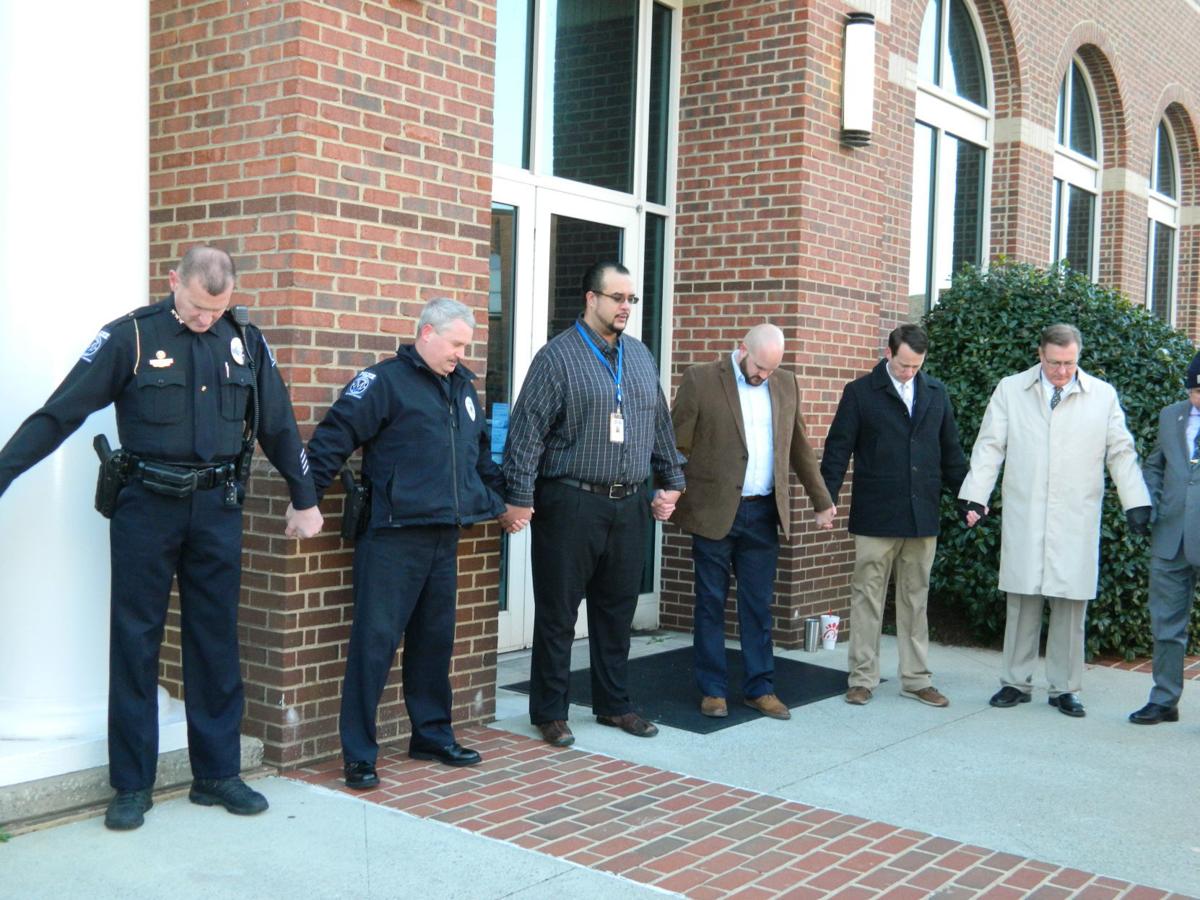 Those taking part in the Unity Walk joined hands in prayer. 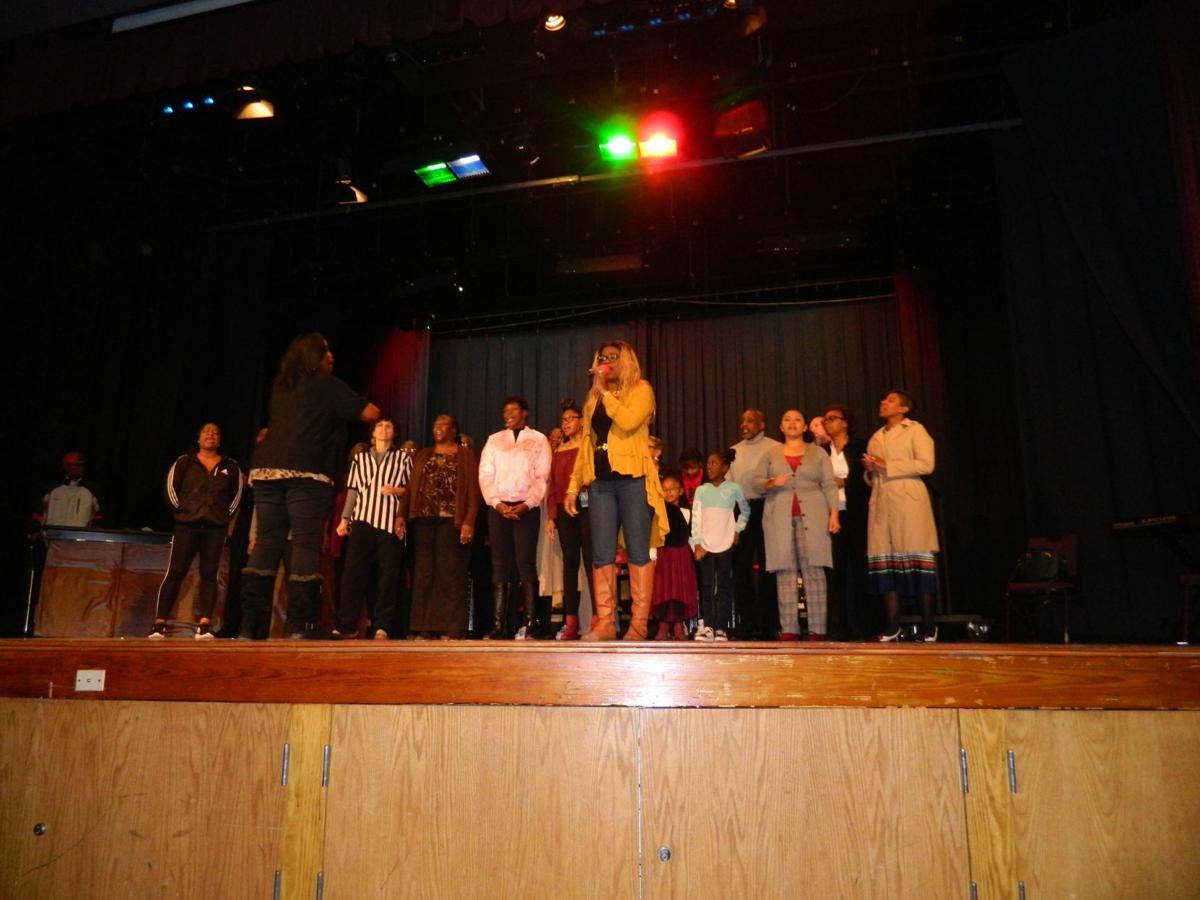 The play "Justice for All" focused on the nonviolent protests of the Greensboro Four.

The Mooresville High School choir performed "Down by the River" at the Martin Luther King Jr. Day Community Celebration.

Dr. Yolanda Wilson was the keynote speaker at the event.

A number of people braved the cold temperatures for the Unity Walk.

Those taking part in the Unity Walk joined hands in prayer.

The play "Justice for All" focused on the nonviolent protests of the Greensboro Four.

Town Commissioner Thurman Houston welcomed everyone to the walk and said, “Let’s get started with the celebration.”

As the Mooresville Police Department escorted the group, participants made their way down Main Street, singing as they went. They crossed over to Broad Street and returned to Main Street, where they concluded the event in front of the center, forming a circle and sharing in a time of prayer led by the the Rev. Jeffrey Wallace, pastor of Living Water Ministry.

Wallace prayed for unity for all as well as a special prayer for the first responders, town and school leaders.

Community breakfastThe celebration continued inside as several rooms in the center filled for the annual MLK Jr. Community Celebration Breakfast featuring the theme: “The Urgency of Equity: When Equality is not Enough.”

Dr. Yolanda Wilson, associate vice president of the business, computer, arts and sciences division and the dean of Learning Commons at York Technical College, served as the keynote speaker. Wilson is the wife of the Rev. Dale Wilson, pastor of Campbell Missionary Baptist Church in Mooresville, and they have three sons, Bryan, Brandon and Braxton.

The Rev. Wilson introduced his wife noting that “she sees teaching not just as a career, but as a ministry.”

Wilson took the podium and began by first giving honor to God and thanked all the town officials and then she moved from behind the podium and said to the crowd, “I would like to have a conversation with you.”

She said that she had been in the community college family for 20 years, first teaching and them moving to the administrative side. This has been her life’s work, she said.

In a Power Point presentation, Wilson talked about a scenario based on 100 students starting a two-year institution in the fall of 2018. She pointed out that by fall of the next year, 59 would remain in college. And then by graduation time, only 41 would complete their college education. And of those 41 students, 12 are white, 11 are Asian, 10 are Hispanic and seven are black.

She then told the story of a young man by the name of Anthony Jack who entered college. He had the intellectual capacity to get there, but not the social skills. “He didn’t know how to navigate the system. Admission alone is not enough,” Wilson said.

To drive this point home even more, Wilson demonstrated the levels of inequality as she had three volunteers on the stage with paper balls and each placed at different distances to a trash can. The closest to the goal had more advantages and resources and support, thus making it easier to succeed. The farther back were those with disadvantages and no support.

“You have to level the playing field,” Wilson said.

Many students are first-generation students, and they feel like frauds and that at any moment they will be found out and asked why they are even there, Wilson said.

Equity and equalityShe stressed the difference between equality and equity. Equality, she said, is “sameness, giving everyone the same thing which only works if everyone starts from the same place. Equity is fairness, which is access to the same opportunity. We must ensure equity before we can enjoy equality,” Wilson pointed out.

She discussed various factors of inequity, including education, funding and incomes.

Technology is shifting, and jobs will be changing, she said. Many jobs will be automated in the future. This doesn’t mean there won’t be jobs, she said, but they will be different. Therefore, “we have to equip our students for these jobs and even retrain our older generation. It’s not a race or gender issue,” Wilson said, but it’s a resource issue.

She noted that there needs to be a shift in the idea that all students need to be college-ready. Instead, this should be that all schools need to be student-ready.

“Our goal is to be student-ready,” she said.

In relating this to a garden, she said, “We can’t say we want better seeds. Our students are who they are, and we love them all. We need to get better soil for the seed to grow. We need to create a better environment for ALL students to grow,” Wilson said. “We are charged with helping them grow. They are a product of their environment. We want every generation to grow higher.”

The special day also included greetings from Mooresville Graded School District Superintendent Dr. Stephen Mauney, who said that “we each share the responsibility of continuing his [Dr. King’s] work. We must put love into action.”

Tenae McLean, chief communication officer for Mooresville Graded School District, was the emcee for the event.

The Mooresville High School choir performed for the crowd singing, “Down by the River.”

Scholarship recipientsTina Bolar, a member of the MLK 2020 planning committee, announced two recipients of the Dr. Lillie Jones Scholarship. The students were unable to be in attendance, but she shared with the crowd from emails that both had sent.

Scholarships will be awarded again this year, Bolar said.

Houston said in relation to the theme of equality and equity, “I don’t think we are there yet, but I think we can get there going hand in hand. Mooresville is the greatest town, I think. We have talents, use your talents for those who are unfortunate.”

Hemann told a story of when he came to North Carolina, he met a man who detailed personal struggles of inequality in the past.

“Today, I learned about the struggles of the future,” Hemann said “I think Dr. King would be proud of the conversations that were shared here today.”

The celebration concluded with a prayer of blessing and unity by MPD Chaplain James Murphy and Rabbi Dr. Andrew Vogel Ettin after which everyone joined in singing “Lift Every Voice and Sing.”

‘Justice for All’Following the breakfast celebration, a community play entitled, “Justice for All,” was performed in the Joe Knox Auditorium. The play, written and directed by the Rev. Jeffrey Wallace, was about the nonviolent protests of the Greensboro Four.

Wallace welcomed everyone to the production. He said that while it was historic, it was written for the enjoyment of the audience and some was fictional. He thanked all the cast and crew for their sacrifice in preparing and presenting the play.

The production took the audience, as Wallace said, “on a journey” of the four young college students from North Carolina A&T State University who staged a sit-in in February 1960 in Greensboro at the Woolworth lunch counter. These four decided to take a stand against segregation, and the next day more African-Americans came and joined them at the lunch counter, and the protest grew. In time, Woolworth agreed to serve them and these four led the way for desegregation.